And so we come to the third part of The Making of a TV Programme. To recap in August 2013 we applied to Lion TV Production to take part in Big Dreams, Small Spaces with Monty Don.

In October 2013 there had been lots of telephone discussions and two preliminary filming sessions.

Between January – March 2014 we demolished the old Garage and rebuilt it in appalling weather. However we did manage to finish the shell by the deadline of the end of March

April 2014 was our first filmed session in the Garden, as we began the project to create a Norwegian garden in Dorset. The ground was dug for the water feature and the Pond liner and the boulders are rolled into place. You can read the details of how the Waterfall, Pond and Stream were constructed in this post 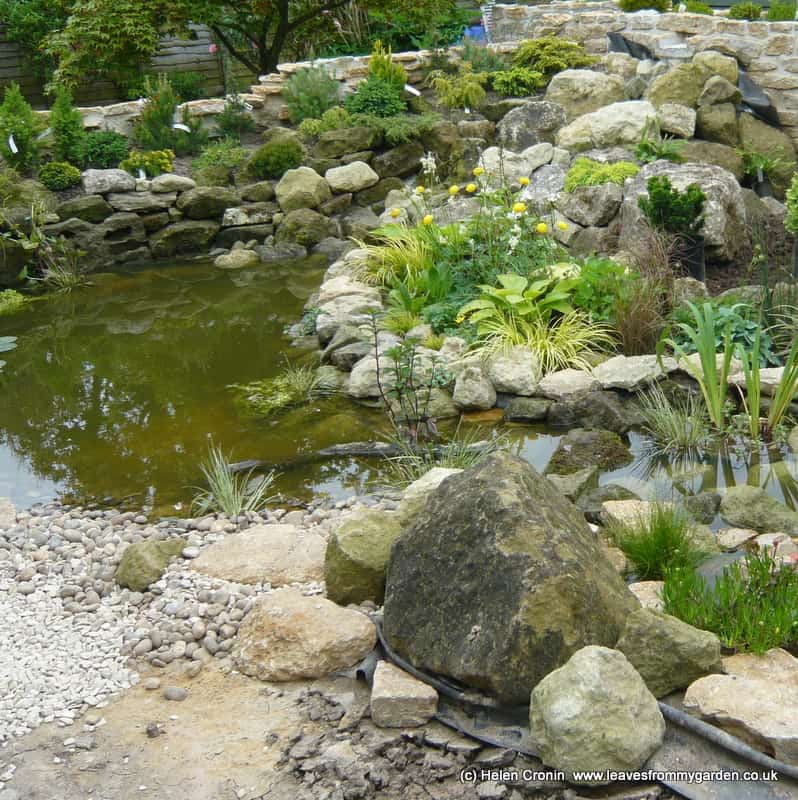 First of a Three-Day Filming Stint

Part of our agreed participation in the filming of us creating our garden, was to be taken to see a Garden for Inspiration. I pleaded to be flown back to Gol in Norway, to the place of our original inspiration. Sadly the Programme budget didn’t  allow for that – not even just for me (and leave hubby at home!). Tim and I really wanted to go to see the gardens at Minterne Magna. We were told that Monty Don thought we should go to Longstock near Stockbridge in Hampshire. The gardens there were made by JS Lewis and are owned by Waitrose LTD (You can read about the Leckford Estate and Longstock by following this link)

We arrived in very foggy conditions but as it lifted, the Ponds and planting were revealed in all their glory. The Gardens are undoubtedly beautiful but they are very different from what we had in mind. With a long day ahead of us, filming began in earnest with the ‘meet and greet’ by the Head gardener. To this day I cannot remember the poor man’s name. It was the problem all day, as we did re-take after re-take. All because I kept getting his name wrong! The dear man was incredibly patient and obliging but must have been gagging to get the filming finished so he could get on with his work. 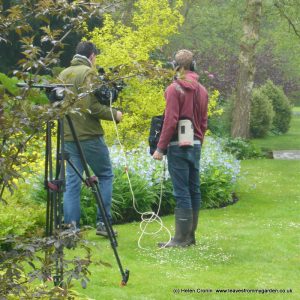 The making of a TV Programme

In private Tim and I agreed that the gardens were not really what we had hoped for but did our best to play our part. So we asked questions about plants and pond maintenance. I think the Producer was disappointed that Longstock did not have the huge inspirational impact on us he had anticipated. But we had been dreaming about our Norwegian inspired garden for seven years. We already knew what we wanted, and started building it.

The Producer had asked if he could have a day of filming with just Tim and me. It was to do a bit of an update on the Garden as well as some background stuff.

We started out by being filmed in and around the Village. He asked us to take our Dogs for a walk across the fields so they could get some shots of the “happy family”. There were technical hitches a-plenty that day, as the Producer had come without wellies and they snapped a microphone lead.

Teddy found something disgusting to roll in and made sure he was well and truly covered in poo! Later they filmed us working in the garden. Tim and I were slithering around on the mud to the point he nearly fell in the Pond. I was soaked through, and had mud on my face. But the Cameraman took great delight in filming the rain running down my neck.

Somehow we got to the end of the day, the sun came out, I changed into dry clothes, and we all parted friends. 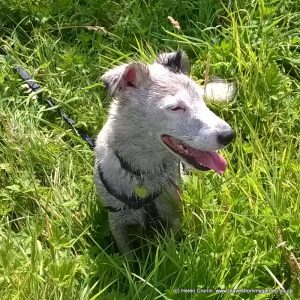 When Monty arrived he was suffering from a lot of pain. He had injured his back/hip helping out at another garden, which was being filmed for Big Dreams, Small Spaces. We had been warned by the Producer that he wouldn’t be able to do much in the way of physical work for us.

Tim and I had already laid the underlay for the pond, installed the liner and built the waterfall. But the Producer didn’t want to film any of that work. As Pond building was to be featured in another the Garden for the Series. Instead he decided to film Monty advising us on planting the dwarf conifers. These trees were to be a feature on the east side of the waterfall. And then he would film us making the Bog Garden. 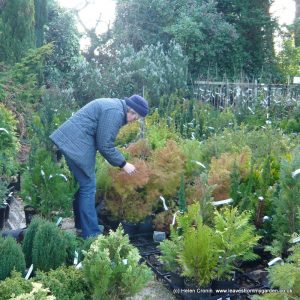 Tim and I had been on two wonderful buying trips to MacPennys, a lovely family run Garden Nursery in Bransgore near Christchurch. (Well worth a visit – You can visit their website HERE). Simon Lowndes gave generously of his time and knowledge to help us in selecting the best dwarf Conifers for our Garden.

When it came to the Big Day, Monty Don and I trotted to and fro from my collection of purchases and set the trees out. I somewhat mischievously placed an Abies in a position that I knew he would disagree with… just for the fun of it. He spotted it and immediately said it would have to go! Testing his knowledge? Me? Nah, not really….

Two Confessions: Monty and I disagreed!

When it came to the planting of the bed at the head of the waterfall, Monty asked me what I planned to do there. We had created an alpine slope next to the waterfall. But I found it difficult to decide what would be in keeping with rest of the planting. It would need to tolerate the exposed position, not grow too tall, and not look like a naff miniature garden. I had chosen three Hebe’s and some Euphorbia cyparissias with its conifer like appearance. As I stood by the wall, Monty was on the other side of the pond and we had a bit of a ding-dong. He said I couldn’t plant the Euphorbia there……

“When it flowers, they will look out of place” he replied

“I can cut them off” I retorted

“You can’t do that!” Monty said

I did plant it. It did look lovely. And I didn’t cut the flowers off.

But what I hadn’t appreciated and Monty hadn’t told me, was how invasive the plant can be. So he was right after all but NOT for the reason he had given!

Our second disagreement was more passive.

Monty helped Tim and I fill the bog garden with topsoil and compost. Then we set-to planting it. It looked lovely. That evening as I stood back after a long day of filming and talking to the Cameras, and looked again. Next morning I looked again ……. and again……. It Bog garden was lovely. But it didn’t look right for ‘our’ Norwegian mountainside stream garden. It wasn’t Monty’s fault; he hadn’t seen what we had seen. He had planted a bog garden with the plants I had bought. But it was not looking natural enough. The Primulas looked out of place.

With my husband’s agreement and a heavy heart, I took everything out and started again. It’s not every day that you have a famous TV Gardener working for you. I was loathed to undo the expert’s work. But it is our Garden and we had to live with it after the cameras stopped rolling and everyone has gone home.

We did tell Monty (and the TV crew) what we had done, and he was very gracious about it.

And just as a side note:

I later found out that he was in so much pain at the time of filming, that two days later he ended up in Hospital. As he needed to be on a Morphine drip, poor chap. You may remember seeing him at Chelsea that year having to use a walking stick. No! We were not responsible! And we didn’t ask him to do more than he wanted on the day of filming with us. It just goes to show that the life of a celebrity Gardener is not all plain sailing. They do get aches and injuries just like the rest of us gardeners.