On one side of our property is the ornamental garden, complete with waterfall, stream and pond. The New Garden is on the other side of our property. It’s not huge its about 43 x 30 feet but what we have been able to create within that space has been amazing.

When I moved here over 15 years ago there was 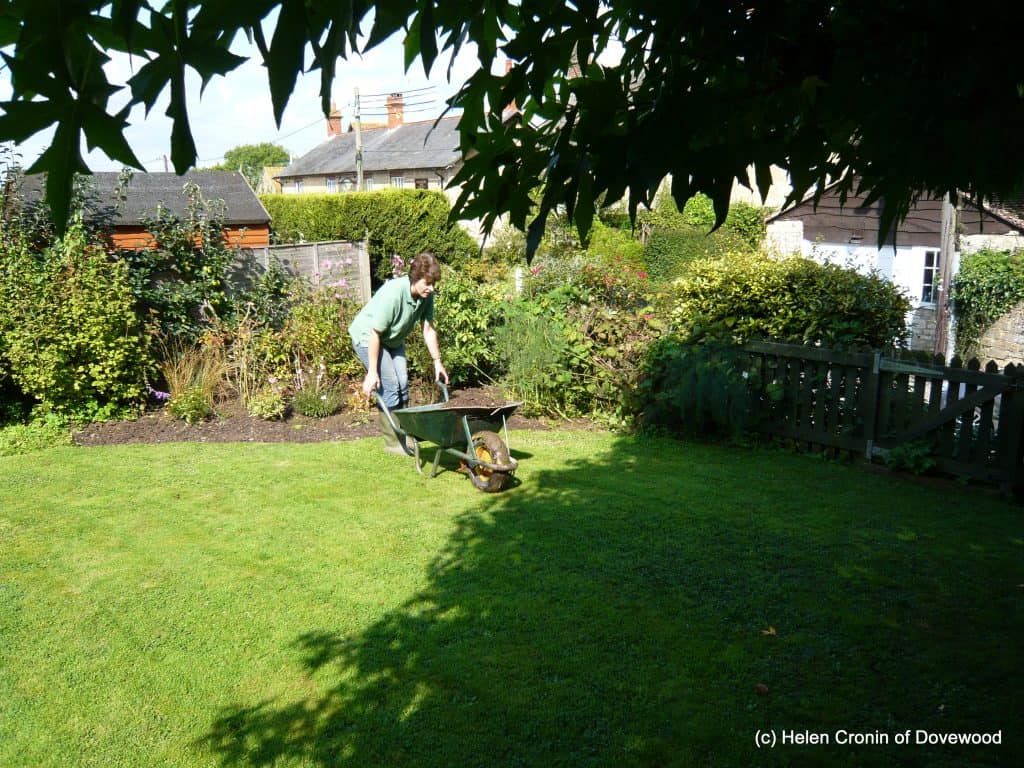 The first thing I did was to have a picket fence constructed along the back of the shrubs. I took out the cotoneaster at the back of the property and created a large bed. Then I marked out two borders along the eastern and western boundaries. In the western bed I grew a few veg, Asparagus, and planted cordon Apple trees. The other beds were mixed shrubbery. A not very exciting garden but cared for, and the dogs had plenty of grass to run around on. 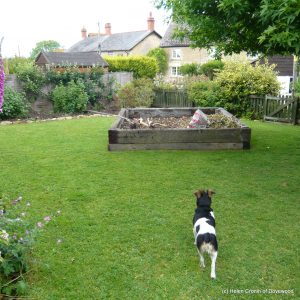 By 2008 we added a raised bed to the centre of the lawn made with reclaimed sleepers, and partly filled the base with rubble that came from the base we were digging out for the new Green Shed on the other side of the plot – more of that later- again we planted a mix of low shrubs and perennials. 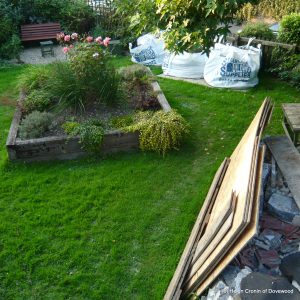 In 2012 we added a small extension to the property. The garden was neglected for a while whilst we concentrated on the building work. We had piles of rubble from the demolished porch and internal wall, as well as dumpy bags of spoil stacked there. Because our driveway is narrow we have to fill dumpy bags with spoil and get them lifted out over the fence by a lorry with a Hi-ab.

This happened again in 2014 when we had spoil from the making of the Norwegian garden.  I was rather ashamed to catch Monty Don having a peak at the rear garden during a break in filming. Seeing it in such a sorry state and not the well-cared for garden it had been must have given him the wrong impression.

It wasn’t an unwanted space just badly neglected during a very hectic time. But by the end of the filming for Big Dreams, Small Spaces, and inspired but what we had achieved for the programme, we had a plan brewing…….

Time For a Change

At the end of 2014 I began to formulate our ideas for the New Garden.

We were going to create a completely new layout for the ground at the rear of the property. 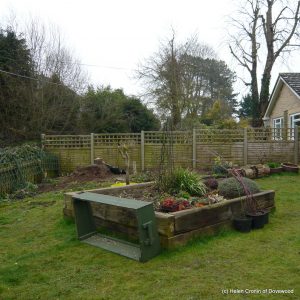 On my/our wish list for the New Garden was

We ended up with was a year of very hard work. We hand filled 28 Dumpy Bags with subsoil and rubble to be lifted out by the Hi-ab Lorry.

Work started with demolishing the raised square bed in the centre of the lawn. Of course that meant I was faced with disposing of the rubble we had ‘hidden’ in the bottom of it years before!

TIP: Never bury rubbish in your garden – one day you or your successors will have to deal with it!

The Acer had to be felled. It was a lovely tree but had really grown too big for the garden. I had had the crown reduced twice so only really drastic work would have kept it within reasonable bounds. But the work would probably have spoilt the shape of the tree. 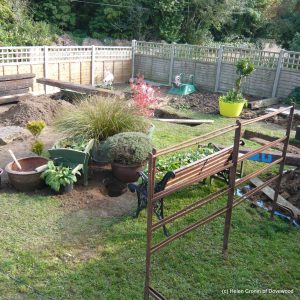 Lawn levelling is not for the faint-hearted

The plot slopes downwards east to west as well as on the diagonal towards the northwest corner. We agreed that the plot would need levelling. We also realised that we had wasted land on the northern boundary, and decided to have the shrubs grubbed out. The fence line was moved as safely as possible, nearer the top edge of the wall.  Gaining us another 3 feet/1 metre of precious ground. It might have seemed like a big expense for little gain but when you have a small garden every extra bit of ground is worth it.

Our next task was to level a 12 foot /3 metre strip right across the garden, alongside the fence for the Kitchen Garden. Into that area we created the raised veg beds, compost area and a base for the Greenhouse.

Hindsight is a wondrous thing

Had we known that there would be SO much spoil, we might have approached the job differently. We would have got a micro digger in, and a trailer on the roadside. It’s easy to be wise with hindsight. But Dumpy bags were filled, emptied and re-filled, as we moved materials around. Added to the couple of bags of materials we brought in, spread, etc we probably moved 30+ tonnes of stuff during 2015/2016. I say ‘we’ meaning my husband and me but in truth I did most of the digging, whilst he did the barrowing. 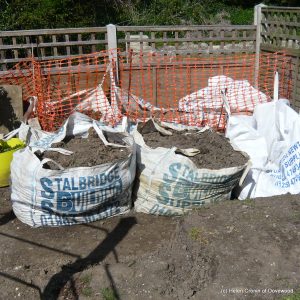 Digging, so much digging in the New Garden

By the time it came to levelling the lawn, I was running out of steam. To achieve our desired level lawn we needed to drop the level of soil on one side of the proposed area, and bringing it up on the other. I managed to lift all the turf and then some family friends kindly came to the rescue. One Saturday we had a mammoth workout as we all set to, rotavating and levelling the soil. 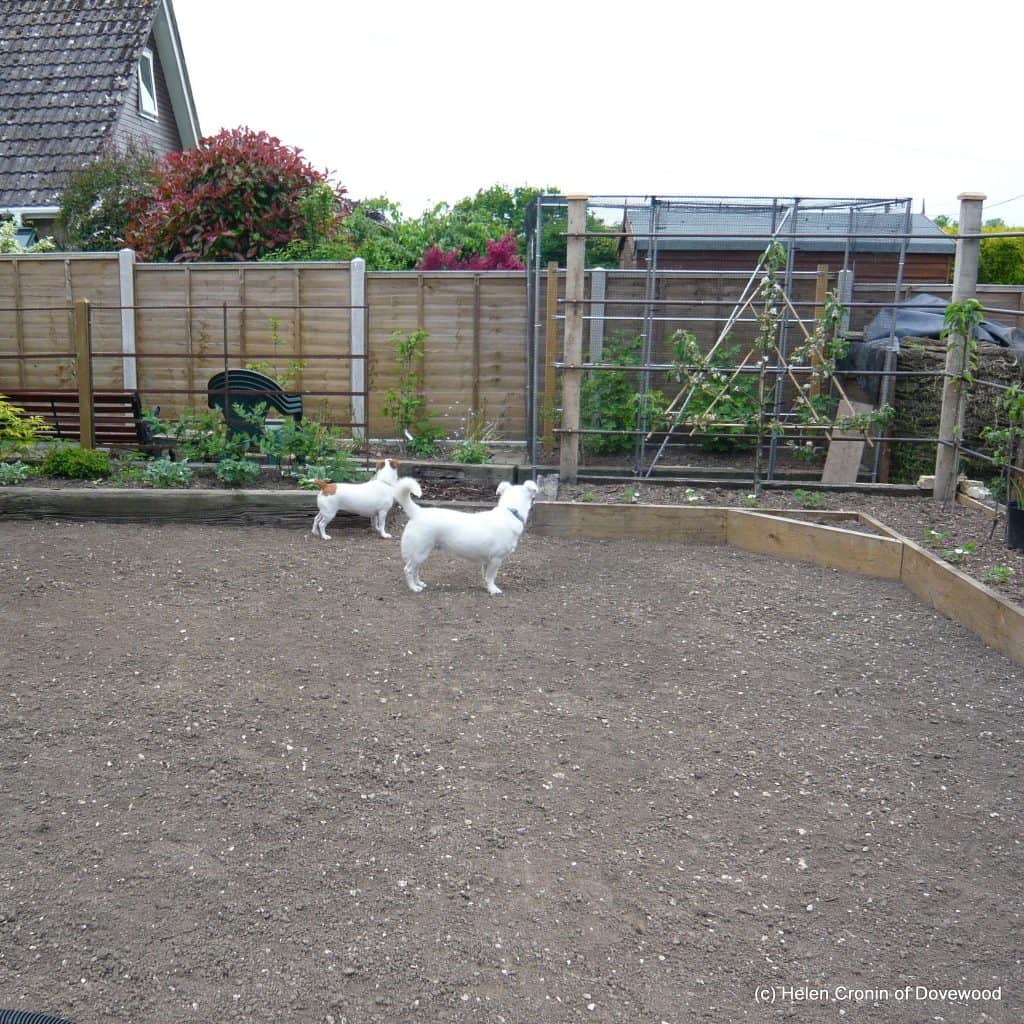 Tour of inspection by the dogs

This new lawn area is surrounded by raised beds to not only make future gardening easier. They also help to retain the soil where the levels are different.  We have used some old park railing for dividing the beds from the paths to the east and west of the lawn. My husband kindly built a framework of oak posts and copper pipes to the north side to divide the lawn from the Kitchen garden. Against this structure we have planted fruit tree cordons.

The Results of Our Labours? 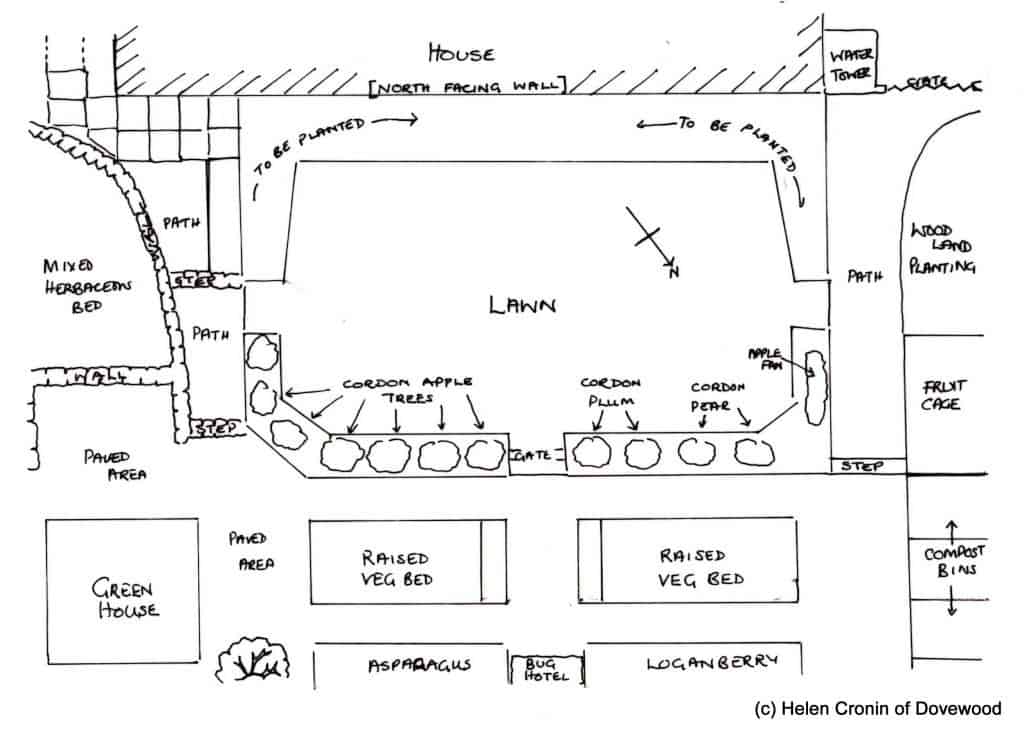 An amazing amount has been packed into an area of roughly 40 x 25 feet. It is not large but with thoughtful planning we have managed to squeeze in everything that was on our wish-list. The different aspects of the planting areas give me the opportunity to grow a diverse range of plants. This all goes to prove that you can have an interesting, and productive garden.

To learn lots of ideas for your garden you can read these posts:-

How to make a Bug Hotel

How to Make a Hypertufa Trough