At one time this seemed to be a regular cry in our Garden, “the Pond has sprung a leak, again!” If your saw the programme Big Dreams, Small Spaces (Series One, episode 5) you will know something of what went into the construction of the Water feature as part of the Norwegian garden here at Dovewood, although possibly not the heart ache it gave then and since.

Although the area is not large the water feature has a rocky waterfall leading into a pond then into a stream. The water disappears into a reservoir where the pump is hidden which takes the water back to the head of the waterfall. 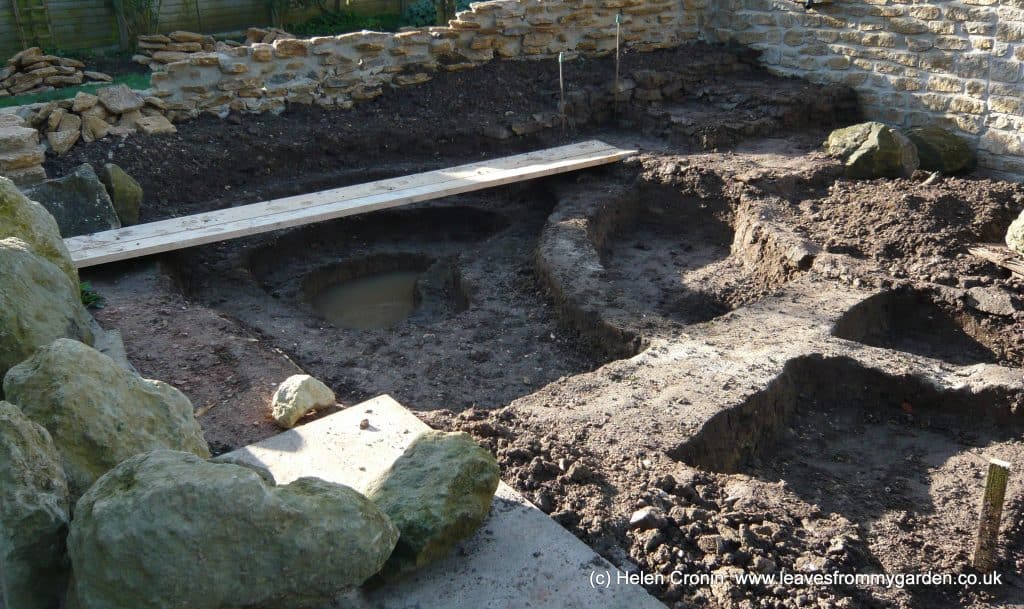 How We Built Our Water Feature

It took me 3 days to dig (by hand) the pond and get the general area landscaped, (approximately 30 x 20 feet). I checked and re-checked my levels as I know this is crucial to the final appearance of the pond – nothing is worse than a large patch of liner showing with no easy way to disguise it – especially with a ‘natural’ pond. 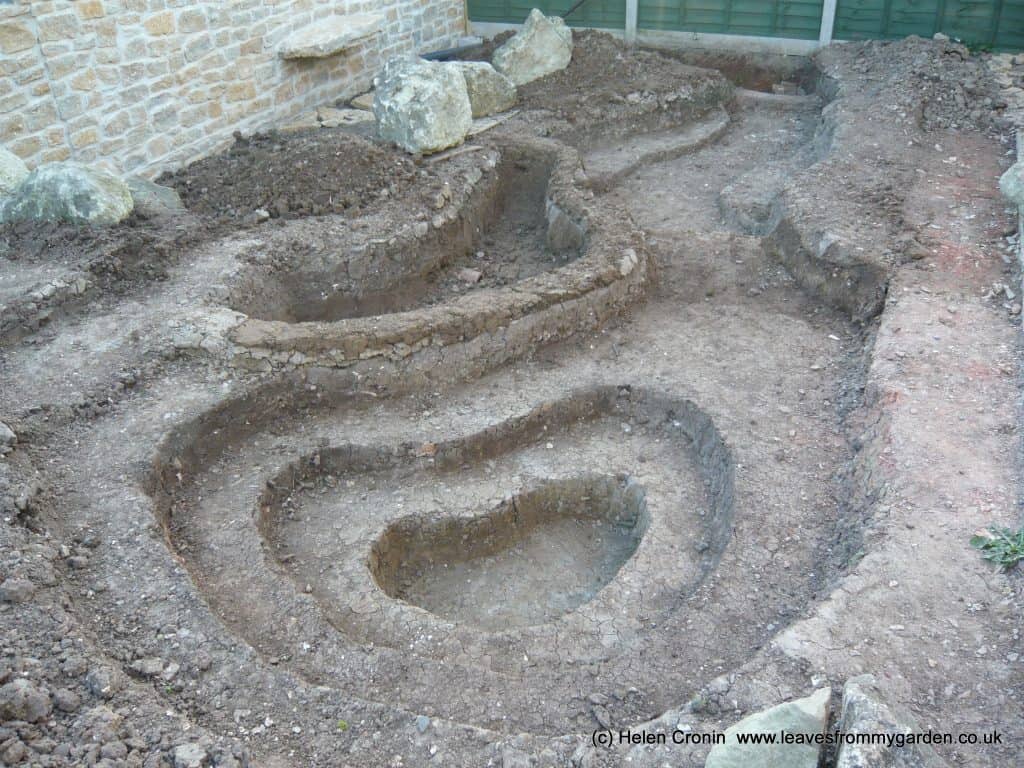 The excavation is finished

I also did my upmost NOT to disturb the soil on the banks that didn’t need to be cut into. Why? I hear you ask. Well my garden is on Clay and there are areas that have been cultivated and have a reasonable depth of nice workable loam. However, the rest is heavy, heavy clay which gets incredibly wet in winter and expands. But in the Summer the clay dries out, shrinks and cracks. Over the course of the year there is a certain degree of ‘movement’. Disturbed soil always settles and compacts, so I really needed to avoid this as there is more than enough movement naturally. 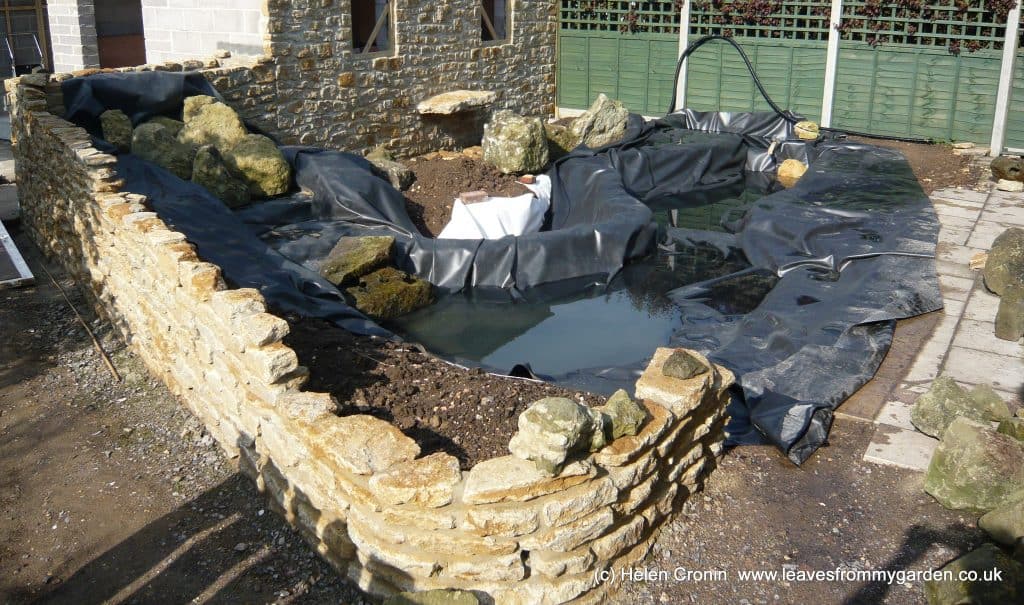 The Butyl Pond Liner in place

How Much Pond Liner?!

We were advised to use a single piece of Butyl to line the water feature which is basically L-shaped, so we bought a huge piece. Two men could barely lift the rolled and folded liner as it weighed 95 kilos. We managed to lay the Butyl by partly unrolling it and then wiggling the “sausage” of liner across to roughly the line of the pond and stream, before unfolding it further. Having laid the liner as per the recognised methods in various knowledgeable tomes, we then had to manoeuvre the rocks into position without dropping them into “the Pond” and puncturing it. We used wooden poles on top of scaffold boards to move the really big ones across the pond, and up the waterfall which was the only feasible access route. 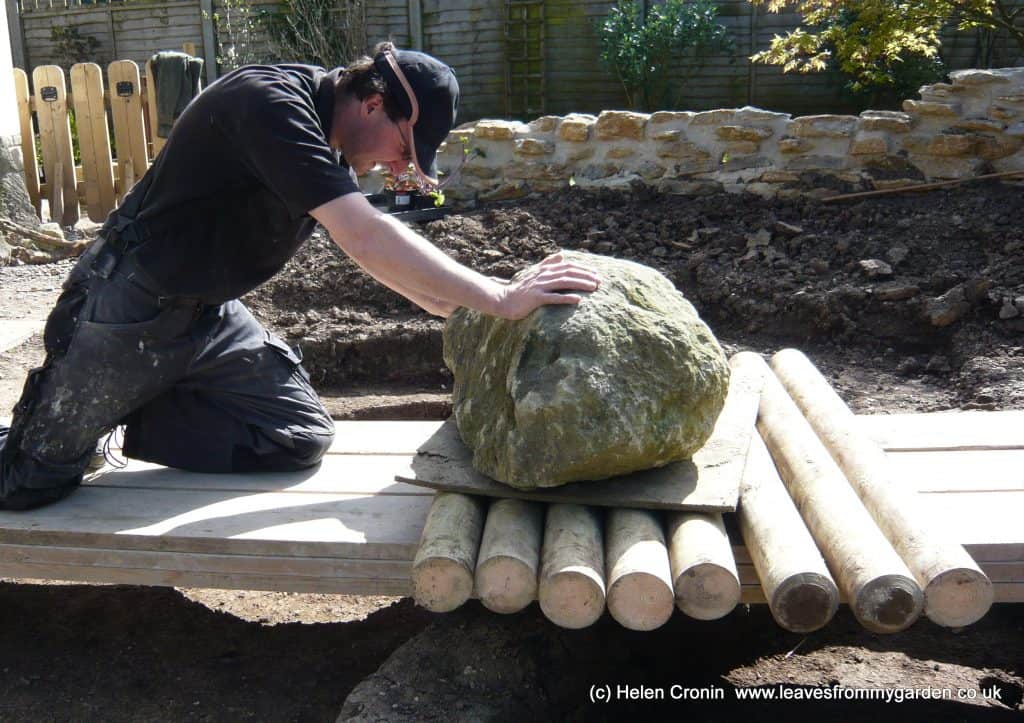 This method worked remarkably well, and it was a pleasant surprise. We had spent weeks trying to work out what machinery or tackle would work. In the end the simplest methods are often the best. If it worked for the constructors of the Pyramids and Stonehenge it would work for us, and it did! 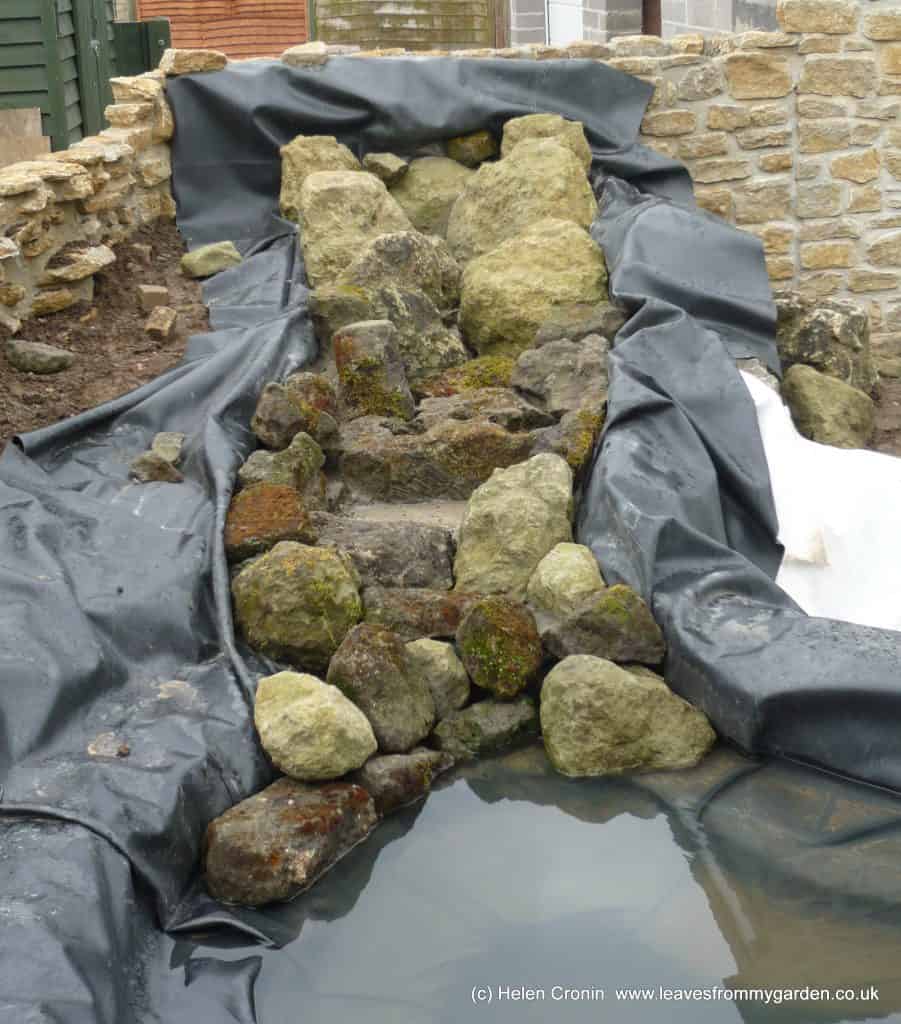 The Boulders finally in position

Our next task was to place the rest of the rocks around the edge of the pond to hide the liner. We laid two inches of concrete along the base of the stream  as we wanted to build beds into the sides of the stream to retain the  soil and give a natural look to it. That piece of concrete has always worried me…….”what if it cracks and moves and pierces the liner….?” 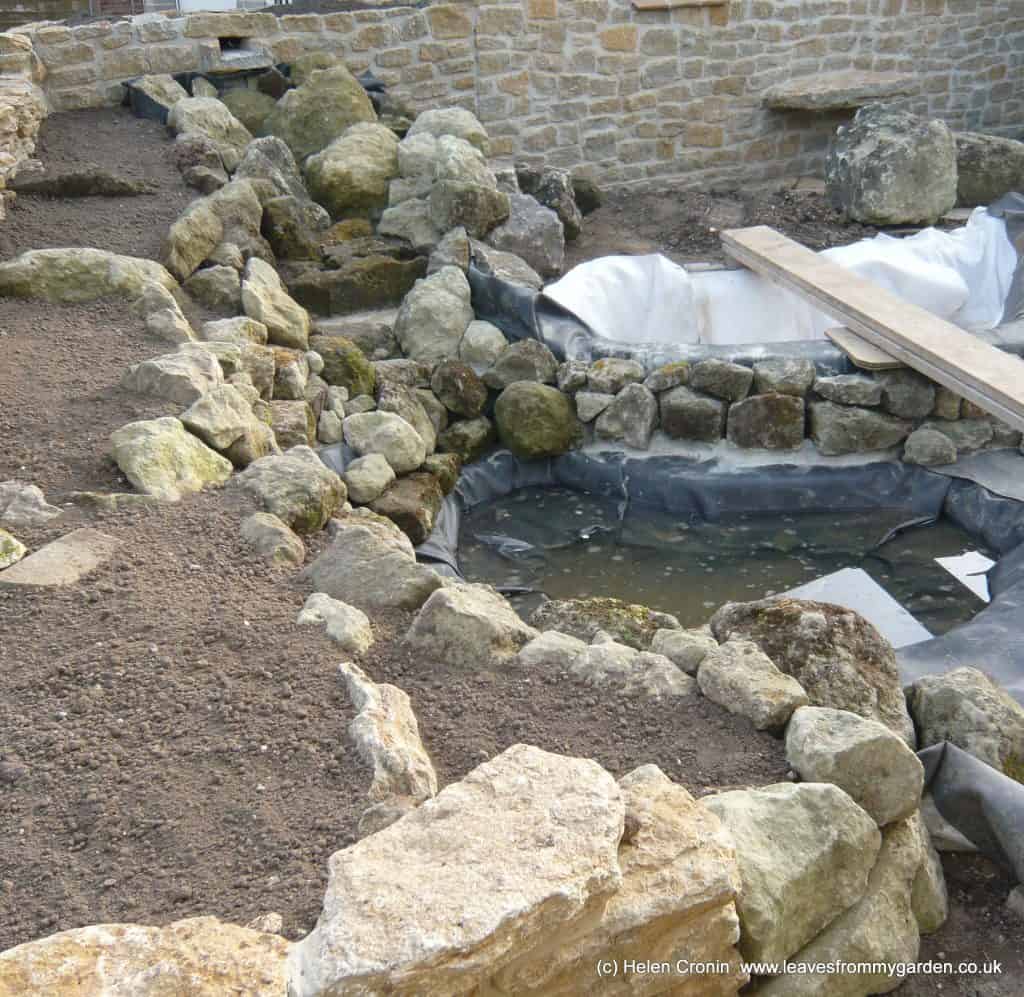 A wooden platform was constructed to hide the reservoir at the west end of the stream on which we have made a wood pile. We also installed a bridge of sleepers for us to be able to cross the stream to get the stone seat on the other side. 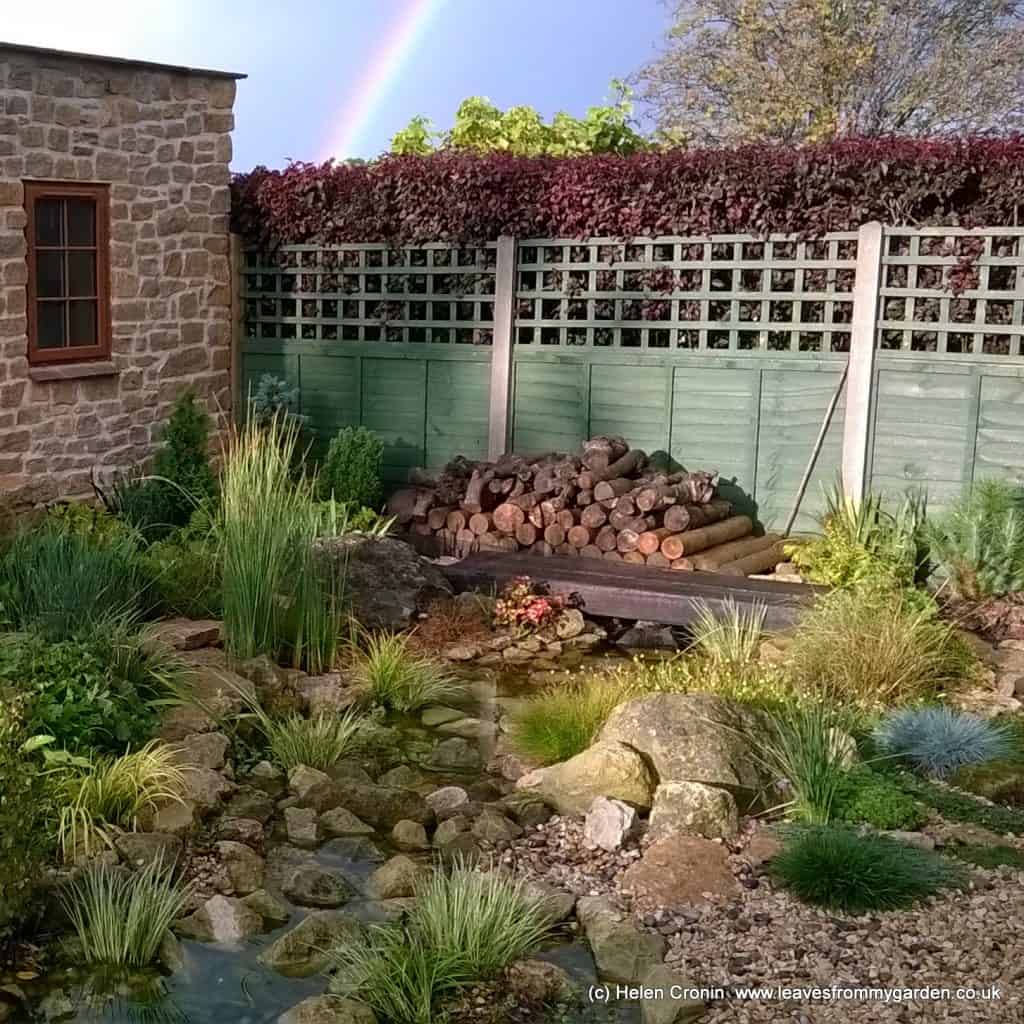 I have made a number of ponds over the years but this was by far the most ambitious, if not largest, of them all. I had read plenty of books and Articles to make sure I knew my stuff before we began the project. Advice both verbal and written was sought during the construction from anyone I thought might help. When we came to it, we just had to get on with it, and do it. But the pressure of doing it within the timescale of a TV production added a pressure we hadn’t anticipated.

I’ll admit there were days when I really wondered what we had gotten ourselves in to, would we be able to ‘deliver’, as well as days when I would have quite liked to have run away. I got desperately tired actually doing the physical work. The days of filming left me exhausted from trying to be continually bright and cheery, whilst filming something for the umpteenth time, and yet trying to make it look as if it was the first.

Who Did Do The Work?

It really annoys me when people ask “how’s the garden Monty Don did for you?”  Grrrr, he didn’t do it! We designed it. I dug it, my husband built parts of it, and it took nearly three months to complete. Monty visited us just three times. He helped in the discussions of our plans and in the planting of the Bog garden. His final visit was to view the finished Garden. Thankfully we finished in time for the last filming session. Monty did seem genuinely impressed by our design and work.

You can imagine my distress then, when a little while later, I noticed the water level dropping. I couldn’t bear the thought of all our hard work going to waste if we had to pull it apart and start again. I think at that point I would rather have moved house! 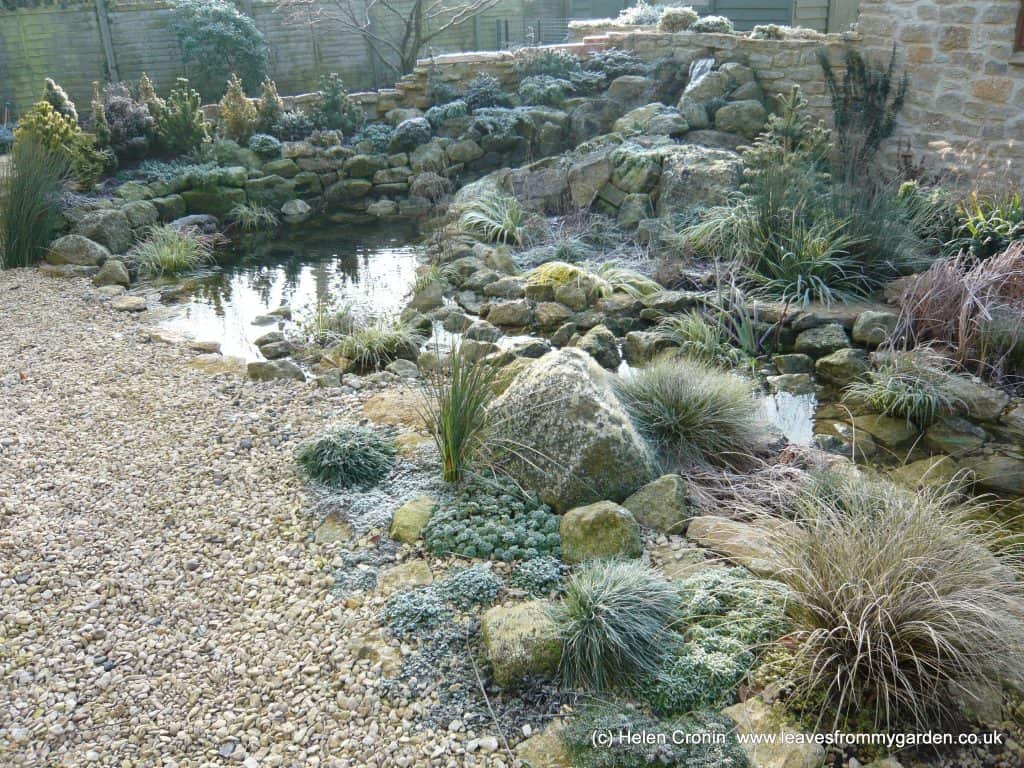 The Norwegian Garden at Dovewood in frosty weather

A Pond Can Be Difficult To Find

As I agonised over the possible cause, I investigated but could not find the reason. I resorted to the internet and Googled (doesn’t everyone these days?) the possibility of water evaporation rates from ponds. It turns out to be a common problem and not one anticipated by the owners of new ponds. You need to take into account

Hence evaporation can be quite noticeable.

We topped up the reservoir. And again…….and again. There were dark mutterings about our water bill. So we installed Water butts. Then one day as I topped up the reservoir the pond level just didn’t rise even after several hours of filling. After poking about, I realised to my horror that one side of the reservoir had collapsed. It was damaged enough to be watering the garden next door! Thankfully we were able to re-build and restore order relatively easily. Phew! 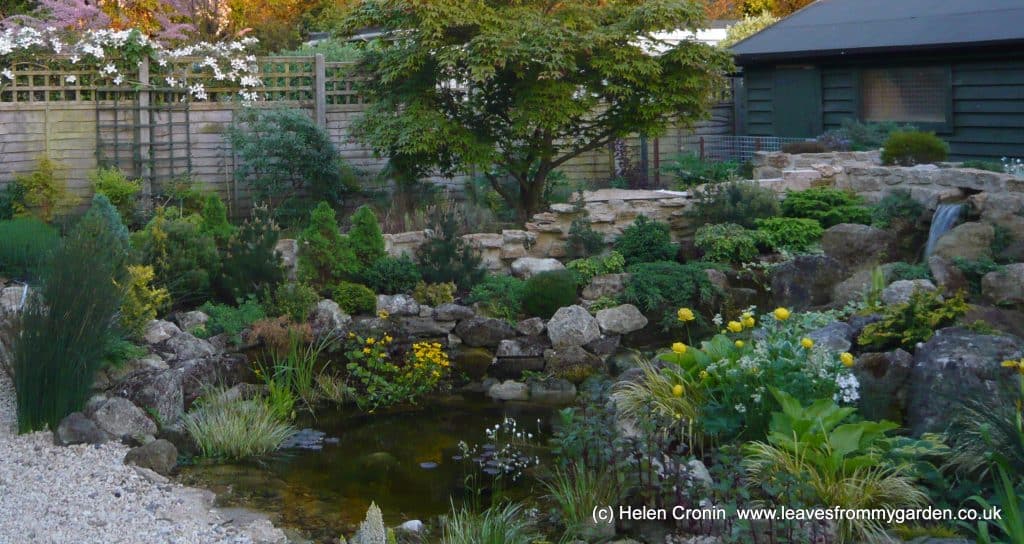 The finished garden just gets better and better

And so it has gone on. Each year the garden improves, matures and delights. There have been other cries of “the Pond is leaking again!” The cause is sought and repairs made. This so far has meant

We have yet to fit a new piece of copper sheet to the water shoot at the head of the waterfall.

So, what was the cause of the last leak? A slight dip in the front edge of the pond (again) because that is where we most often stand to look at the Pond (= more soil compaction)! It was a mere trickle but enough to mean losing about 75 litres in 18 hours. That adds up to nearly 700 litres a week, if my maths is right. Good thing I noticed it before we had emptied our three Industrial sized water containers trying to ‘top-up’ the Pond level!

To learn how we harvest rain water to top the Pond level up and water the garden read the Post Water, Water Everywhere

114 shares
« My Husband Is Not A Gardener
Scent In The Garden or Not! »