I’m sure many of us have photos or memories of this climber dripping with blossom, and draped across the front of beautiful houses and cottages.  I know there is a good deal of fear about how and when to prune, which probably puts many gardeners off planting one but it really is not at all difficult. So here is a simple guide to pruning Wisteria and caring for this delightful climber. 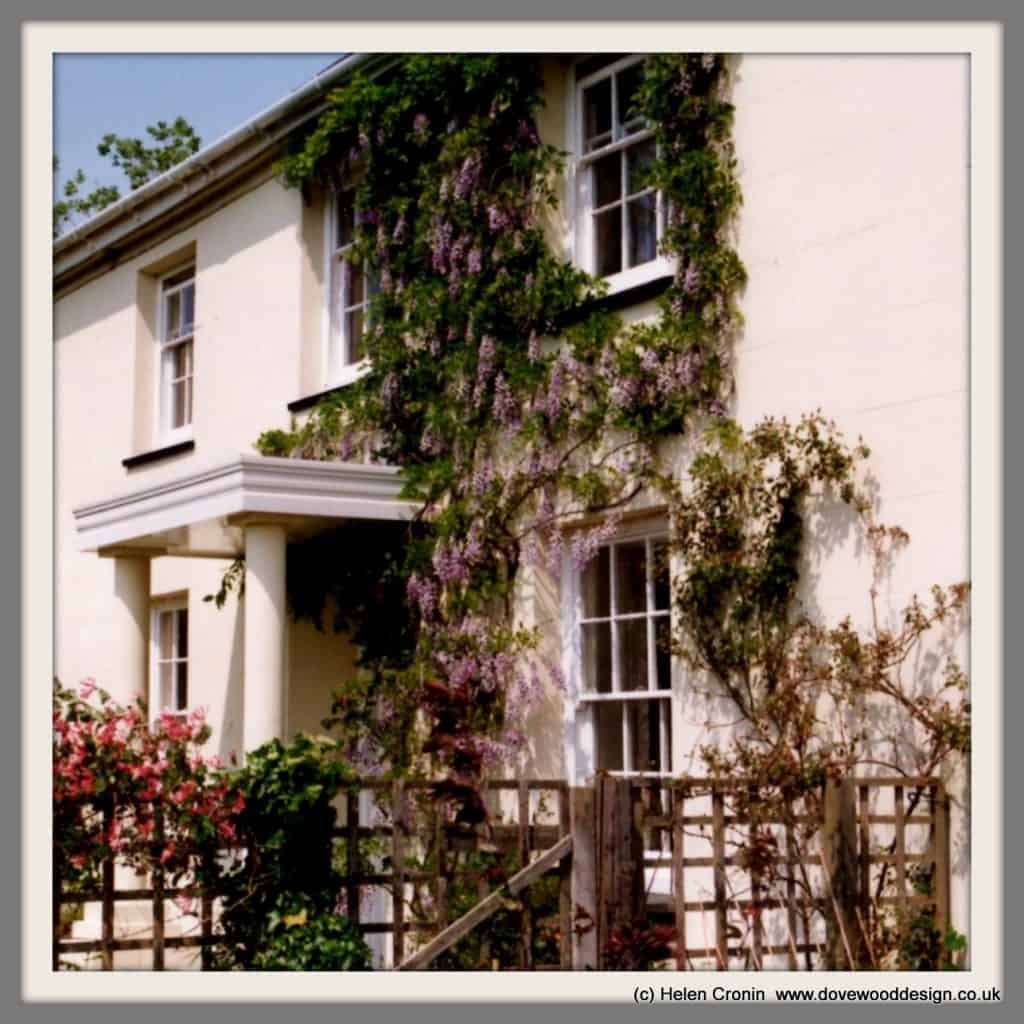 Wisteria in full flower at the Old Manse in Pembrokeshire

Years ago my father and I visited a lovely Georgian Manse that had a glorious Wisteria trained up and over the front porch. The owner advised that it took just 10/4d to achieve the look! We were somewhat puzzled by her statement until she explained further. We had assumed she was talking a sum of money (pre-decimalization)) in fact, she was giving using a useful mnemonic!  You simply prune twice a year! Once in Summer – cut all the long whippy growths back to 10 leaves. In the winter cut them back to 4 buds. 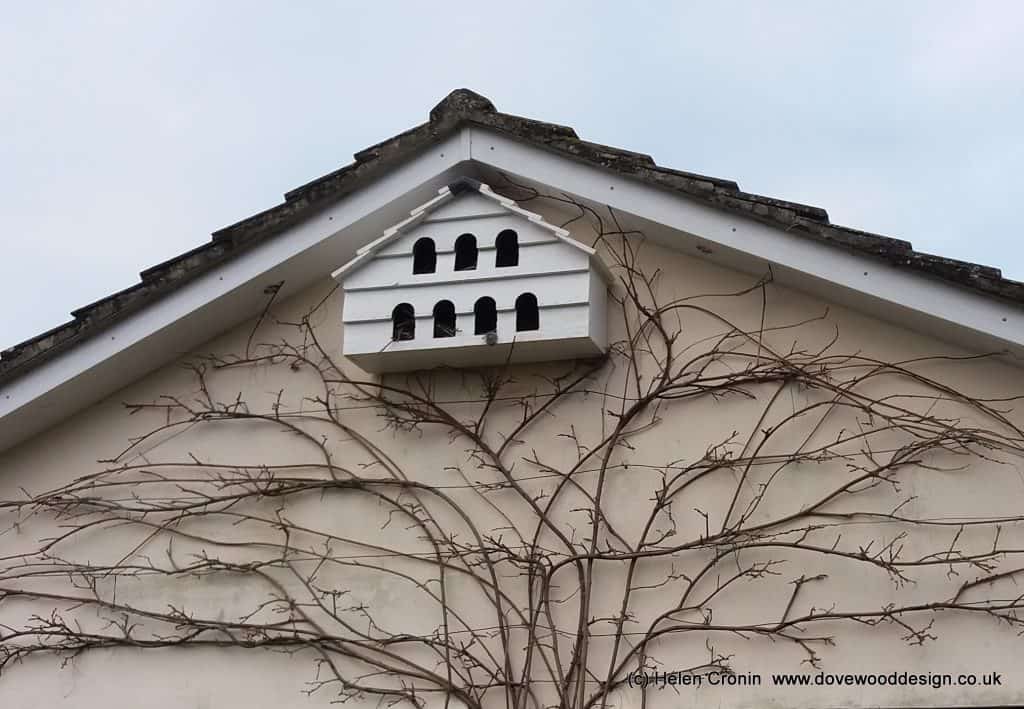 Wisteria before the Winter Pruning session

Do not be tempted to plant more plants than are actually needed. A Wisteria can easily cover an area 40 feet wide and are known to spread as far as 100 feet given enough time. We planted our one climber just five years ago.

If you haven’t already planted one choose the variety you are going to plant carefully, there are a variety of colours from white to pale lilac to dark mauve. Take into consideration the colour of the wall  or support behind it and how well it will contrast or harmonize. Our Wisteria flowers before it comes into leaf and then a second flush of flowers later on. Although some varieties come into leaf first. Some Wisterias are scented so you might find the fragrance overpowering, if you like to have your window open day and night.

Remember that you may need to climb a ladder twice a year to prune, so give carefully consideration to not only how high you can safely climb but also how well you can position the Ladder. Allow the main stems to rise up to the height you require, training them on wires or trellis, tying in the long whippy growth where necessary if you need them to go up and then across above windows as we have done.

A NOTE OF CAUTION We made the mistake of allowing our Wisteria to twine around the Trellis instead of just tying it into the face of the support. The stems will swell and as with ours, the trellis is becoming embedded into the trunk of the Climber. Only time will tell whether the wood of the trellis will rot before seriously damaging the stems 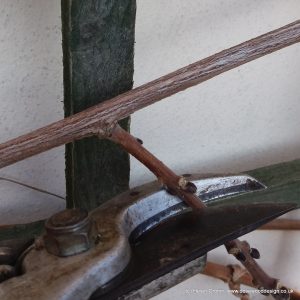 It is best to prune in late winter, I like to do mine in February before the sap starts rising and the buds start to swell. Using a sharp, clean pair of Secateurs (to avoid snagging or damaging the surrounding bark) angle your cut as shown, not too close and not too far from the last bud.

Work your way steadily over the whole plant, keeping long whippy stems where you want to train the climber further but shortening any stems that have reached as far as you want them to grow. Each bud you leave on the long whippy growth will eventually produce small knobbly branches, which is where the successive years blossoms will appear

Remove any dead wood you see and check all existing ties are not too tight and cutting into the bark. Tie in any stems that need training with garden twine or plastic plant ties. Twine looks nicer and will rot but it is not so easy to tie when you are on a ladder. 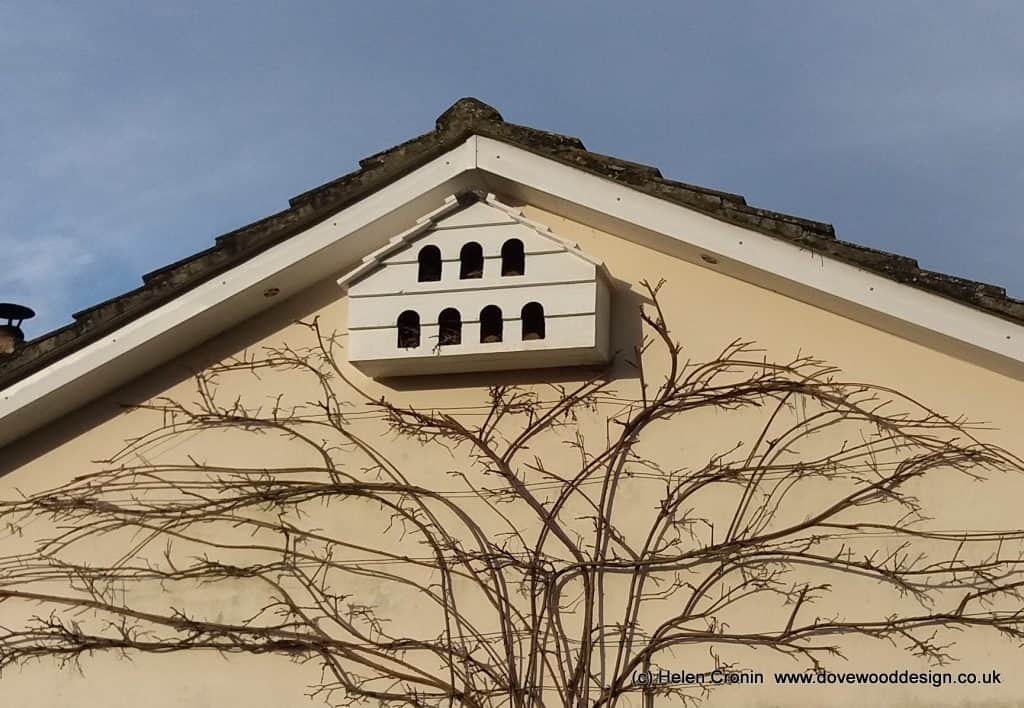 Here is the ‘after’ photo showing clearly the short stubby side shoots that will produce flowers NOTE there are some long stems left where we are still needing to develop branches. (Although from this picture I can still see one that needs to be cut out on the left!)

When you have finished pruning, do remember to give your plant a generous handful of a general purpose feed. As the base of ours is mulched over with gravel we apply a liquid feed. And the result? Well, judge for yourself……… 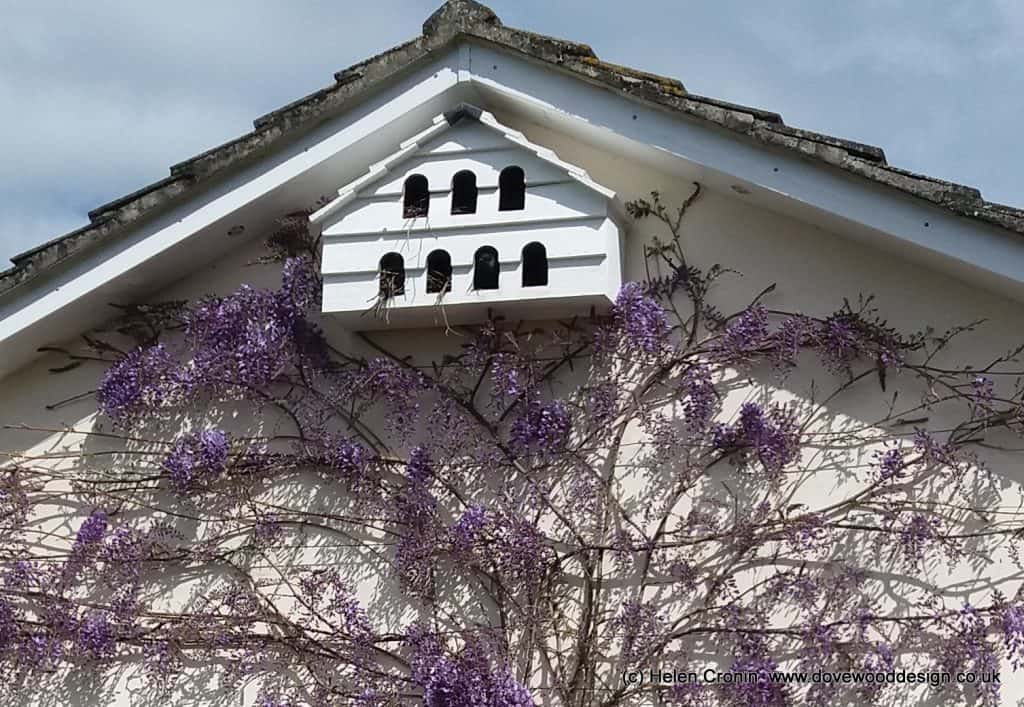 Pruning Wisteria in the Summer is much easier. You simply cut back any long whippy growth to approximately 10 leaves. By that I mean those sprays of leaflets (each spray counts as one leaf) which grow either side of the long brown stem. I tend to cut mine in about mid- summer. Although there are times I snip off those that are dangling and catching in my hair as I walk past!

Wisteria will occasionally give a second flush of flowers in the Summer, although there will be far fewer Racemes.

Keep the bundle of long whippy off-cuts as they make excellent plant supports. They can bent over into hoops to protect young seedlings and emerging herbaceous growth. Ypou can weave them into plant supports

Pruning Wisteria is another of those jobs that need to be done every year so make a note of it in your Garden notebook. Alternatively sign-up to get a copy of the Garden task sheet and note it on that. You can get yours by clicking on the form below 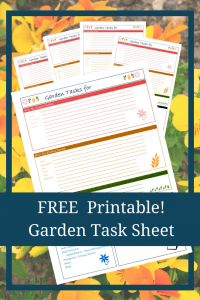 It's so lovely to gather a bunch of flowers from m

New favourite view of my garden. What's yours? #m

This handsome chap lives just down the road from m

This website uses cookies to improve your experience while you navigate through the website. Out of these, the cookies that are categorized as necessary are stored on your browser as they are essential for the working of basic functionalities of the website. We also use third-party cookies that help us analyze and understand how you use this website. These cookies will be stored in your browser only with your consent. You also have the option to opt-out of these cookies. But opting out of some of these cookies may affect your browsing experience.
Necessary Always Enabled

Any cookies that may not be particularly necessary for the website to function and is used specifically to collect user personal data via analytics, ads, other embedded contents are termed as non-necessary cookies. It is mandatory to procure user consent prior to running these cookies on your website.